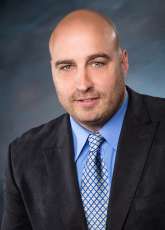 Over 20 years with Industrial Furnace Company.

Following a similar path to that of his brother Jim, Jake came back to Rochester NY after a year at West Point’s Preparatory School in Fort Monmouth NY and immediately jumped into the field working for Industrial Furnace Co for the first time in 1992. He worked that summer, and then the next 4 summers, working with the same foremen and lead men that had developed and worked alongside his Father and Uncles many years before.

In between those next four summers working at IFCO, Jake attended Columbia University where in addition to majoring in political science and business, he also played both football and baseball for the Lions. After playing a year of professional football in Germany following graduation, Jake returned to Industrial Furnace Company in the winter of 1996 and has worked full time for the family owned business ever since.

Jake's early years in the company were spent in the Rochester NY main office. While working out of NY, Jake took note of just how much work the company was doing down in the southeastern part of the United States. So in response to that, he relocated to Atlanta GA in 2005 with the sole intention of building upon what was already a large volume of work being done in the south east. Where in the past, IFCO serviced these projects with personnel from NY; Jake established an office/warehouse in the Atlanta area with a local crew and office staff that was now better suited to handle the ever expanding work being done down south.

This new office not only helped to strengthen the already strong partnerships that IFCO had formed with its existing customers in the southeast (municipalities and waste water plants being the most prominent of that), but it also helped to forge new relationships with customers who worked in industrial fields that IFCO had limited dealings with in the past; industrial areas like the Kaolin industry, pulp and paper, as well as of all of the power plants which are so prevalent in this part of the United States.