The City of Atlanta Wastewater Services Division undertook a “fast tracked” upgrade of its multiple hearth furnace at its R.M. Clayton Water Reclamation Center in 2001. The project was completed just in time to meet the 503 regulatory deadline and incorporated new emission control system technologies. The emission and operational control improvements achieved by using new, patented scrubber and flue gas re-circulation technology has cost-effectively renewed, not only the multiple hearth furnace, but also the City’s re-considered interest in continuing biosolids thermal processing for the foreseeable future. This paper reviews what the upgrade project included, results achieved, and how it got done within critical time limits and eliminated a major visual public nuisance that had been a “landmark” on Atlanta’s north side.

The City of Atlanta Department of Public Works Wastewater Services Division operates three Water Reclamation Centers (WRC). In 2001, the City completed a multi-year, $650 million construction program upgrade of all three WRCs. At two of these WRCs, the biosolids are thermally processed by multiple hearth furnaces (MHFs). In the fall of 2000, the City undertook a review of its future biosolids disposal options. As part of this planning, the City also considered what needed to be done in the interim period while other disposal options were being investigated and reduced to operational practice. In view of the Part 503 compliance deadlines, and the need to have sufficient “back-up” disposal capability while other options were explored, the Division decided to proceed with a planned upgrade of one of these MHFs at the R.M. Clayton WRC. The initial upgrade design for the MHFs had been completed in the mid-90s and included new scrubbing equipment and afterburning modifications. The City, however, faced the familiar public agency challenges of time, cost, and public acceptance.

The time challenge was to complete the upgrade in less than 9 months to meet the September 2001 Part 503 deadline. There were limited funds available for the furnace upgrade. There was also salient public concern with regard to thermal processing of biosolids versus other disposal options. The 30 year-old Clayton WRC furnaces had a highly visible steam plume which had been a “landmark” on Atlanta’s northwest side for many years. For these reasons, the undertaking of this project included several key elements: (1) a “fast tracked” design-build construction contract to meet the deadline and save cost, (2) a value engineering review of the upgrade design, and (3) the inclusion of the latest and most cost effective emission control technology to accomplish the upgrade within a limited budget and alleviate public concerns. This paper reviews what the upgrade included, the results it achieved, and how it got done in critical time.

Existing Configuration
The R.M. Clayton WRC daily biosolids production is about 50 dry tons per day of anerobically digested biosolids. The centrifuge dewatered biosolids are typically 20-21% solids and 55% volatiles. The Clayton WRC has two (2), 10 hearth by 22’ – 3” diameter MHFs that were built approximately 30 years ago and use either digester or natural gas for auxiliary fuel. They were equipped with low pressure, impingement tray wet scrubbers and fixed speed induced draft fans. With this old scrubbing equipment, and no provision for afterburning, these furnaces were not capable of meeting the new 503 emission requirements, and the system capacity was limited. In addition, the highly visible steam plume was a public nuisance “eyesore”, even though the furnace operation was in legal compliance with all other applicable standards. A schematic of the existing furnace configuration is shown in Figure 1.

Upgrade Design
The original upgrade design for the Clayton MHFs was reconsidered in view of time and cost constraints, and the critical need to achieve the most cost effective emission control upgrade package. Conveyance and other ancillary improvements included in the original design were excluded to save cost. Recent upgrade experiences at other facilities were reviewed to confirm what specific emission and operational control improvements were best suited for the Clayton MHFs. Among these, the significant emission improvement results achieved by the Hartford, CT Metropolitan District’s upgrade of two similar (30 year old) MHFs was most relevant. The Hartford upgrade also included several specific improvements that were already a part of the Clayton furnace upgrade design plan. These improvements were: (1) conversion to a “Double Zero” hearth afterburning configuration, (2) a multi-venturi (EnviroCare), high energy wet scrubber retrofit, (3) a variable speed induced draft fan, and (4) new MHF “Jet” type burners and control systems. The Hartford furnace upgrade also included the use of Flue Gas Re-circulation (FGR) fans to provide improved thermal process stability, capacity, and emission control. FGR systems had also been recently installed on MHF operations in New Haven, CT and Woonsocket, RI with notable improvements in process control and furnace capacity. Since the Clayton MHFs were being converted from (10) hearths to (8) “working” hearths with a double zero hearth afterburning configuration, the value of the capacity, control, and emission improvement features of the FGR system being added to the upgrade design was considered cost effective. Shown in Figure 2 is a schematic of the upgraded Clayton furnace configuration.

The upgraded furnace was officially performance tested on September 6 and 7, 2001 just two days past the Part 503 deadline of September 4th. Figures 3 and 4 show the significant elimination of the old stack visible plume condition accomplished with the emission control improvements. Figures 5 and 6 show a summary of the emission performance test results for particulates, metals, and THC at the tested feed rate of 2.4 dry tons per hour (57.6 dry tons per day). The particulate emission rate (0.17 lbs per dry ton) was 88% below the standard. The overall 503 target metal removal efficiencies were 99.99%. The THC concentration was 88% below the standard. Target organic compounds were also effectively reduced to very low, miniscule levels by afterburning in the 1200-1250 oF range. These emission test results impressively confirmed that the “clear” stack visibility, which the plants’ neighbors are now applauding, is also very “clean”. The Plant received phone calls from the neighbors wanting to know “what” we were doing with the sludge, because they were certain the furnaces had been shut down.

Figure 7 shows a comparison of the projected Clayton furnace emissions per year associated with thermally processing one person-year of biosolids residuals with the emissions from driving a 1998+ model year auto (with 25,000 miles on it) for an annual distance of 10,000 miles. This comparison provides a significant reference as to how new emission controls have made the thermal processing of biosolids more environmentally sound and comparatively “as green” as other disposal methods. In the specific case of the Clayton Plant, excess digester gas that was previously being flared is now being more productively used for afterburning emission control. By using digester gas for auxiliary fuel and afterburning (and the biosolids volatiles), the Clayton furnace operation also accomplishes the beneficial use of this bio-renewal energy sources for the thermal water evaporation and oxidation processes of reducing the volume of the biosolids residuals to an inert ash.

The operational performance of the Clayton furnace has been significantly improved by the equipment upgrades. Operators have characterized their day-to-day routine experiences with the
new upgraded furnace operation as “like having a completely new machine” with significant relief from their past operational headaches and handicaps, e.g.:

The City faced the September 2001 deadline posed by the Part 503 regulations. The limited availability of funds would only cover the cost to upgrade one of the two Clayton WRC furnaces. Furthermore, if the planned upgrade of the one furnace was not completed in time, the second furnace would have to be shut down in September 2001 for non compliance, and the City would be faced with expensive trucking of all the biosolids to the landfill. Given this time frame, the City initiated the project on December 24, 2000, leaving essentially only eight (8) calendar months for ordering equipment, re-construction, start-up, and performance testing to meet the September 4, 2001 deadline. For this reason, the City engaged two construction companies, already under contract with the City, that had the critical experience and capability to undertake this design-construction time challenge. The General Construction contractor was Pizzagalli Construction Company of Burlington, VT, and Industrial Furnace Company of Rochester, NY was the furnace-specific design engineering and construction contractor. The work of these companies was coordinated by the City of Atlanta’s Construction Management Group to undertake a design-build type of upgrade project. Under a staged purchase order schedule, long lead time equipment delivery items were ordered in the early months of 2001. Actual site construction did not start until the furnace was shut down in the last week of May. This left less than three (3) calendar months to remove the old equipment, install the new upgraded equipment, and still allow time for start-up and performance testing. Even though this was an extremely “ambitious” schedule, the City’s Construction Management Group and the contractor’s staffs maintained a close working relationship and commitment to not sacrifice either the quality of the installation or its working operational safety.

The system start-up and de-bugging process was completed in two weeks. Safety and quality assurance check out by the City’s Construction Management Group was expedited by the
contractor’s use of the open architecture features of the GE Cimplicity SCADA system design and the use of “intelligent” electrical control system design and documentation software. On September 1, 2001, the final equipment check out was completed and the initial biosolids feed to the furnace was started. Incinerator Rx Corporation was engaged to assist with the equipment start-up, operator training and performance testing. Full furnace operation started on September 2, and Official stack testing was started four (4) days later on September 6, 2001. Now, that is just in time delivery!

The Wastewater Services Division has been quite pleased with the total outcome of this project effort. We salute the remarkable combined effort of the construction companies’ staffs and the City’s Construction Management Group staff in getting this job done. Atlanta has now joined many other large metropolitan agencies that have recently upgraded their old MH furnace equipment with new emission and operational controls to achieve very clean stack emissions and renew the useful life of their equipment investment. With this new found “relief”, from the “old” problems associated with trying to operate 30 year old equipment to today’s standards, this project has shown that old “incinerators” can be renewed into well controlled thermal processors that are “cleaner and greener” with the help of modern emission and operational control technology.

The substantial improvements achieved by this upgrade have resulted in the City considering the continued use of thermal processing for the foreseeable future as a part of its overall biosolids disposal plan. Public stewardship commands not only that we have the dependable capacity to dispose of our biosolids in an environmentally sound manner, but that we do so in a way that makes the most of the ratepayer’s dollar. This seems to be one of those rare instances where the least expensive option is also the “Greenest”. For these reasons and others, the City is upgrading the second furnace at the Clayton WRC to provide an essential “bridge” to what might come next, and to provide the necessary “back up” disposal capability that will likely be needed as additional disposal options are explored. 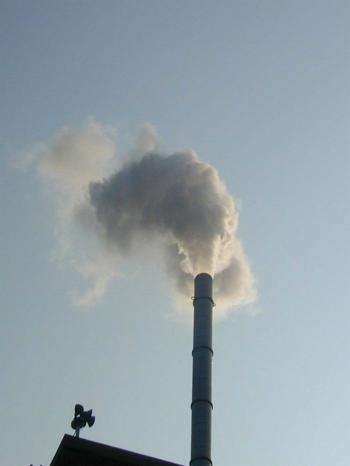 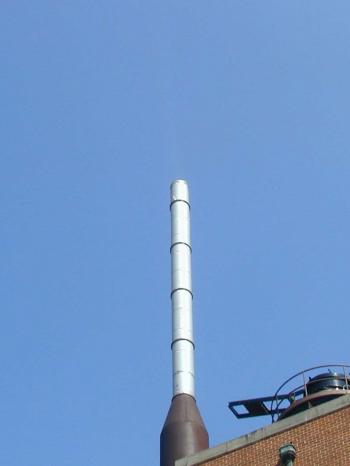